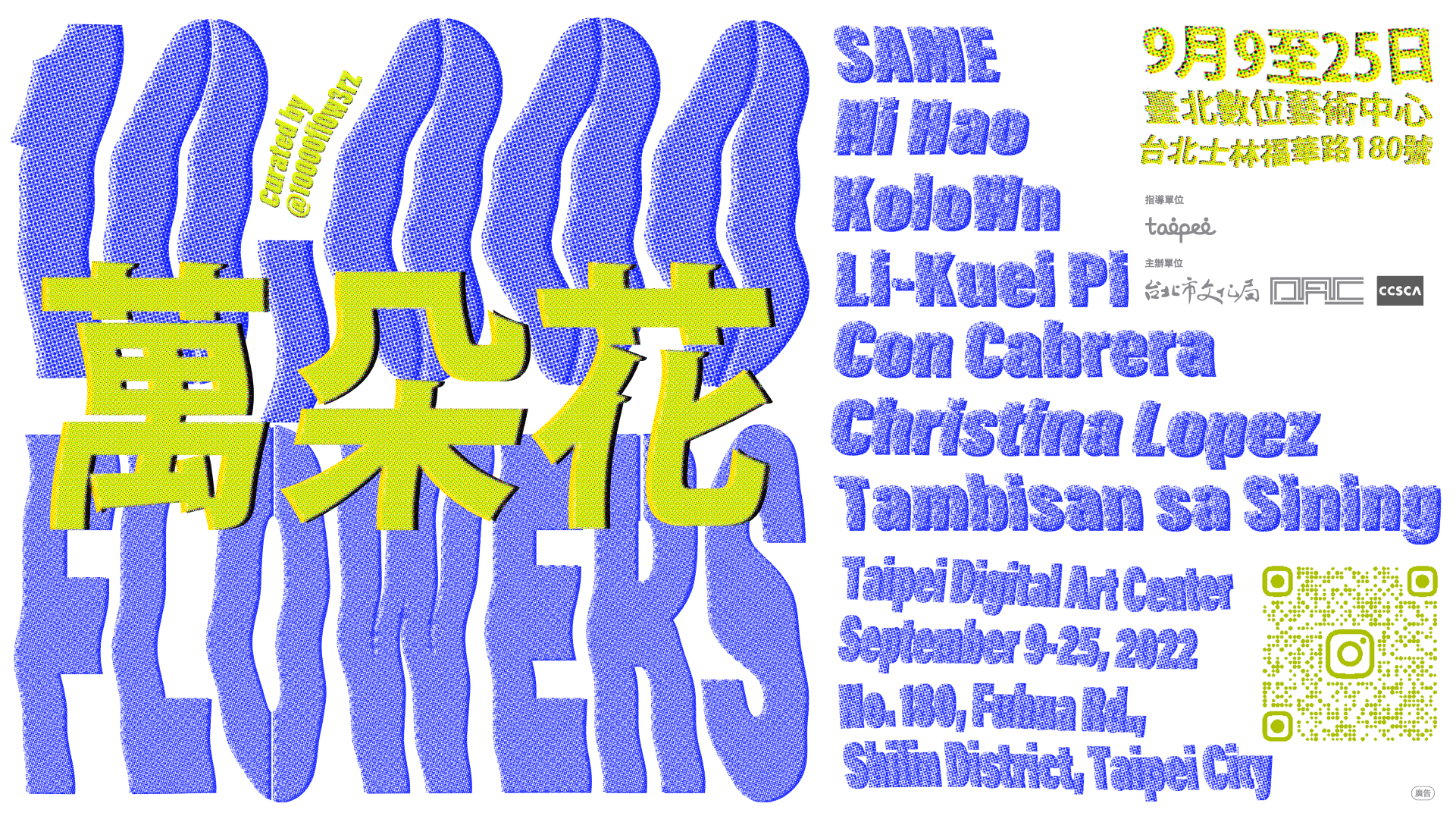 “The crisis consists precisely in the fact that the old are dying and the new cannot be born.”
–Antonio Gramsci

“We must blossom everywhere.”
–Anonymous

In this period of interregnum—the in-between of two phases—crises persist as unspeakable acts find homes in the hearts of a few while affecting the lives of the many. Two years into a global pandemic, how should one act when the next crises are always promised soon enough? How does one navigate the increasingly digitizing world, peddled by corporations and nation-states, while tethered to a laboring corporeal body? As conflicts arise from the prolonged death of the old, how does one address the blooming of the new?
10,000 Flowers puts into dialogue the accounts of 5 artists and 2 art collectives from the Philippines and Taiwan—KoloWn, Li Kuei Pi, Con Cabrera, SAME, Ni Hao, Christina Lopez, and Tambisan sa Sining. It invokes considerations of what freedoms, in its multitudes, exist and what liberties and responsibilities this privilege entails. How can one examine such privileges? Should they be preserved or leveraged so that other flowers may bloom as well? In divining for answers, each artist and collective contribute and converse within a kaleidoscope—significations, affects, struggles bounce around and refract from one to another. 10,000 is the Daoist number representing both the totality of existence and the inconsequentiality of measuring things. Flowers are people, ideas, and life itself. 10,000 Flowers considers the multiplicity within a call for growth, resistance and resilience, and the reconsideration of what constitutes as new during times of struggle and crises. 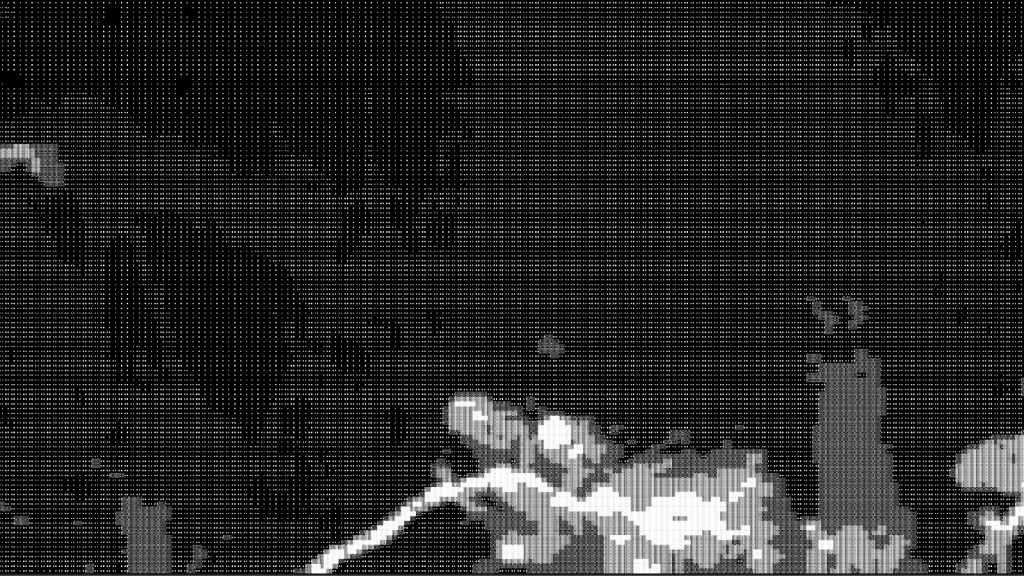 Untitled – Channels explores the dynamism between power and technology. Through a two-channel video and audio installation, Christina Lopez investigates the entanglement of technological explorations, such as artificial intelligence and machine-learning, with global capital. She, however, simultaneously acknowledges the protracted dialectic of these two forces through the historical role of art in rewiring and reconfiguring this dynamism as protracted propositions.
This commissioned work provides a pivot point in recognizing the complications of technology with power. How do we talk about technological developments while recognizing the different agendas within funding bodies such as venture capitalists and nation-states? Where do we locate art within this dynamic?
＿ 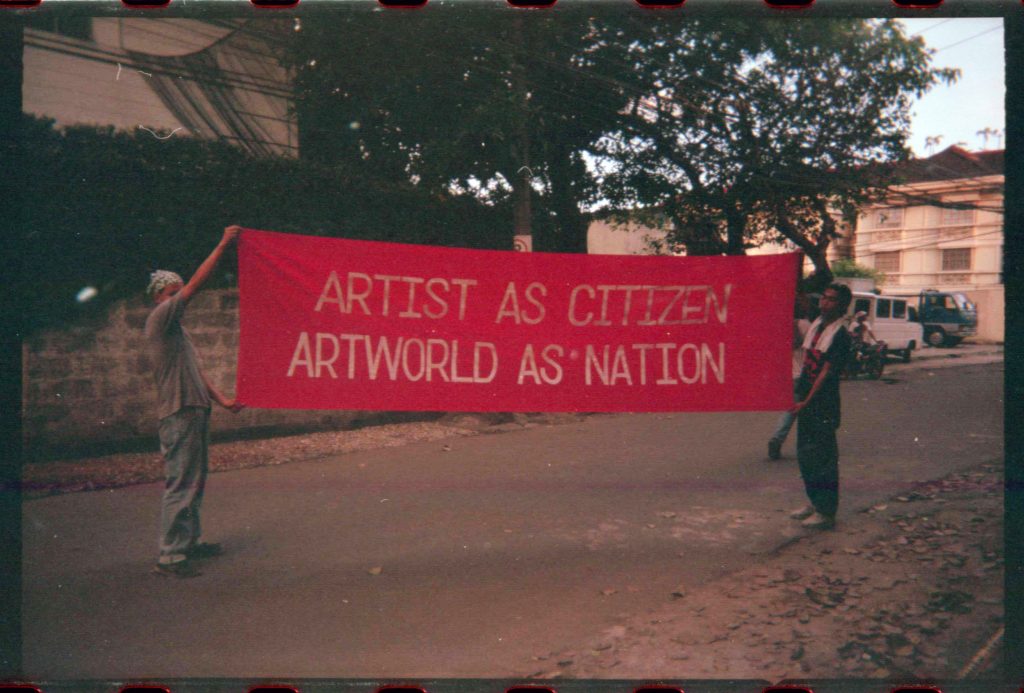 Artist as Citizen, Artworld as Nation is a theoretical proposition coined by Con Cabrera anchored on Arthur Danto’s The Artworld and Maria Serena Diokno’s Becoming a Filipino Citizen: Perspectives of Citizenship and Democracy. It attempts to confront the meanings and roles of the words, segmented and as a composed cluster. It also offers an orientation for action within, but not limited to, the ecology of art production.

The idea was first presented through an essay published in the book Traffic in 2017 and was visualized to be a banner for an exhibition in 2018. The original banner has been exhibited in several sites including condominium rooftops and institutional museums in the Philippines.
＿ 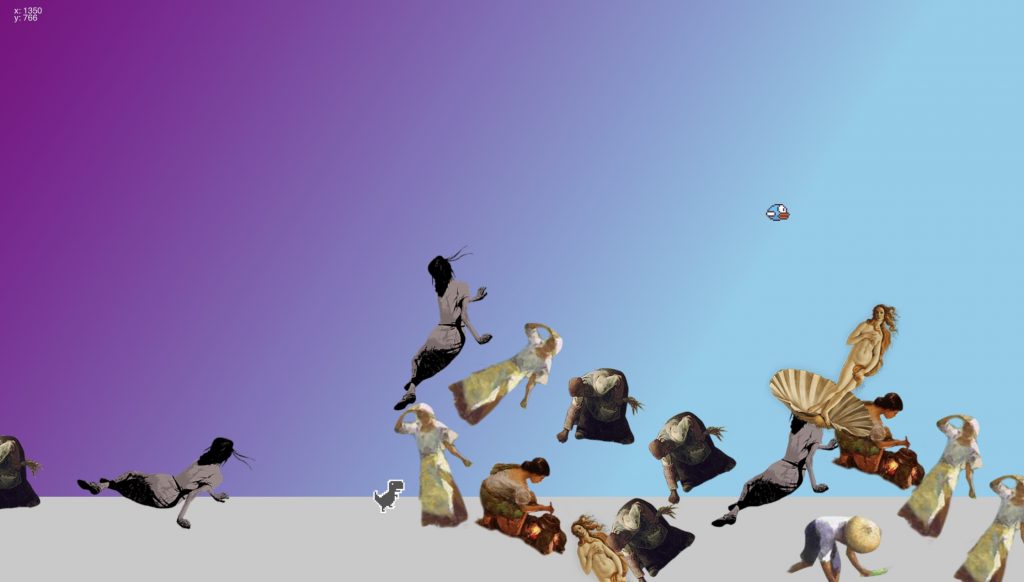 TradeWinds_Meteor Garden is the second iteration of the Trade_Winds series. KoloWn’s Trade_Winds explores poetically the effect of exchanges of culture, products and ideas in the globalized world. The title is taken from the Taiwanes Drama Series and one of the first famous “Asianovela ” that was brought to the Philippines in 2003. TradeWinds_Meteor Garden features a generative collage that resembles an ambiguous landscape-painting-inspired composition. The elements will be taken from various sources; from past historical paintings, contemporary internet to pop culture and crowdsourced images from both Taiwan and the Philippines that respond to the participants’ interpretation of “freedom”.
The installation setup will provide a QR code that would redirect to a website that has a button. If the audience will press the button, it will trigger the elements to appear randomly within the composition.
The composition that will be generated could be a rough sketch of the contemporary globalized world. Is it harmonious or is it full of contradictions? Is it heaven or is it hell? Do our actions have an impact on the bigger picture?
＿ 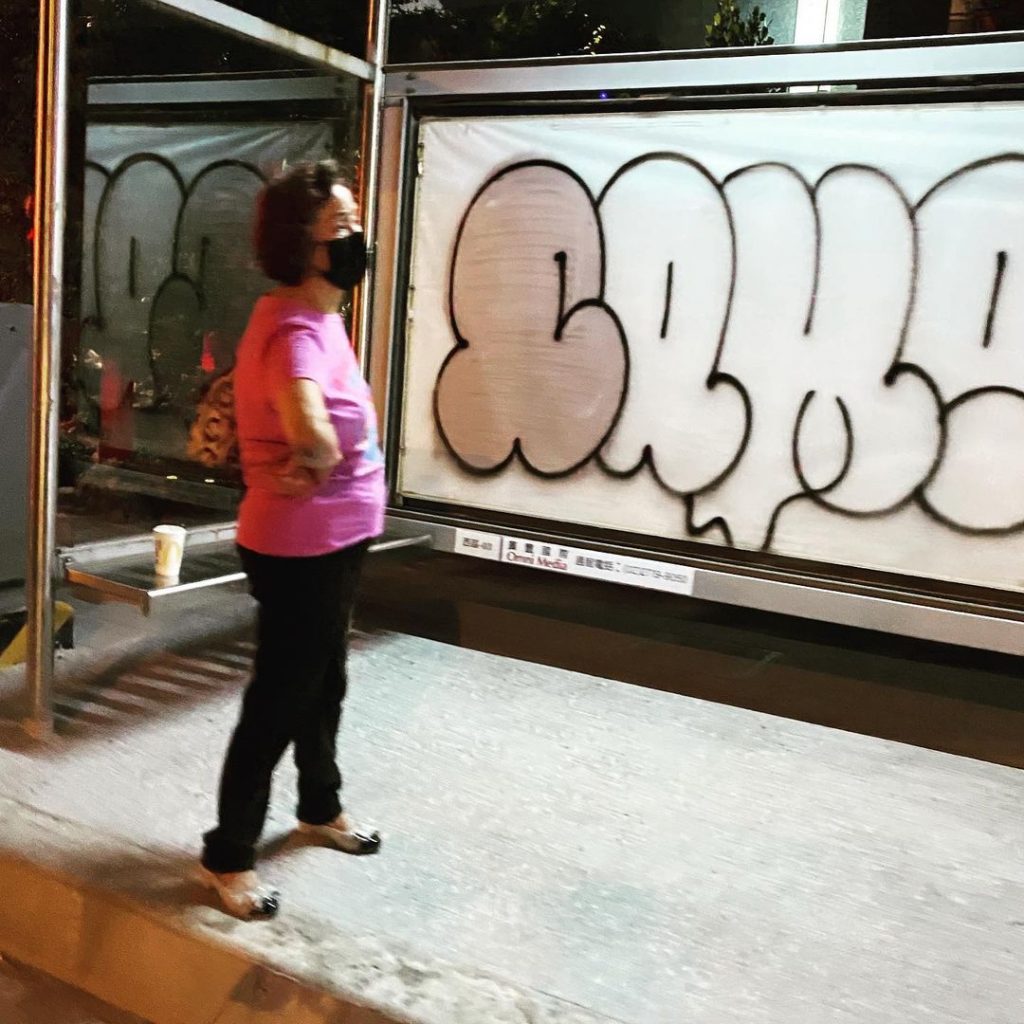 SAME
my name is SAME
2022
Acrylic paint and oil paintings

my name is SAME is a commissioned site-specific mural composed of multiple “Throw-Ups” — a graffiti writing method designed for quickness and utility. Simple in form yet complex in application, the throw-up is a product of years of disciplined repetition and practice. SAME’s throw-up embodies a graffiti writer’s struggle for perfect imperfection and active rejection of conventions.
As a practice commonly situated outside and in public spaces, the gesture of the throw-up is heavily affected whenever it is relocated or repurposed. Within an institutional space, SAME seeks to elevate the throw-up as an artform whose process and development holds equal weight to the aesthetics of its visuality.
＿ 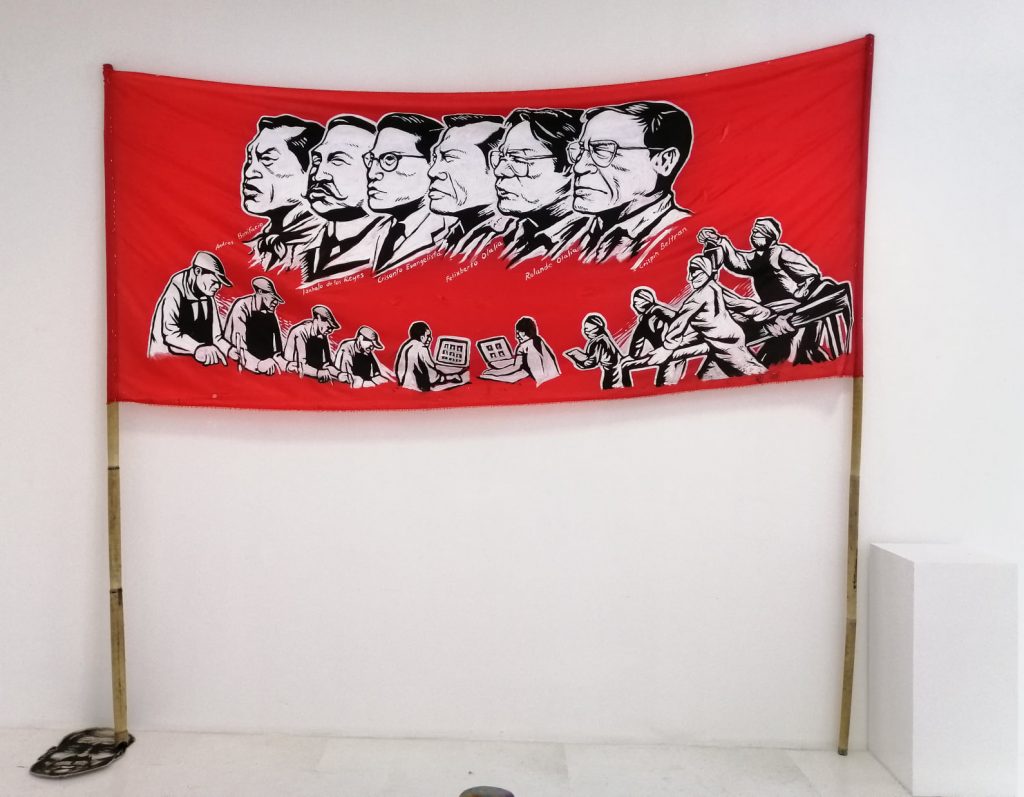 Various political paraphernalia (a protest banner, zines, and a documentary featuring women union worker organizers) were sent to Taipei from Manila, Philippines.
Tambisan Sa Sining (Interaction in Arts) is a cultural collective which started in 1979 and formed in alliance with the workers in the Philippines. Tambisan Sa Sining has worked closely with Kilusang Mayo Uno (May One Movement), the largest workers union coalition in the Philippines.
Constellating the milieu in which Tambisan sa Sining was founded in with Taiwanese history, from 1972 to 1986, the Philippines was under the dictatorship of Ferdinand Marcos Sr. He was deposed by a popular uprising in 1986 similar to the democracy movement in Taiwan in 1987.
The political paraphernalia from Tambisan sa Sining become objects of dissent and organizing which are important artifacts in our exhibition as they explore imagined, collective, and possible futures.
＿ 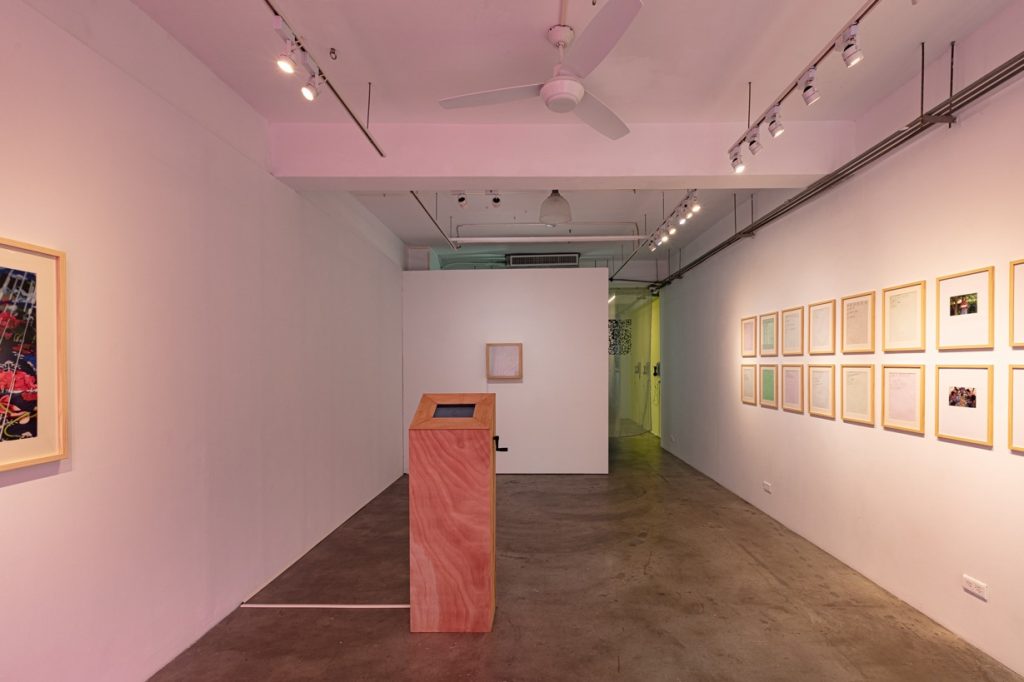 Kha-Kha Share Project is based on Li’s artist residency in New Delhi and living experience in NOIDA (New Okhla Industrial Development Authority), a satellite city of Delhi created under the UP Industrial Area Development Act, and her engagement with the community.
While NOIDA has become the city with highest GDP In India, it nonetheless experiences significant economic inequality due to its traditional social structure and system.
In 2017 and 2019, Li visited the local school and conducted a hand crank electric generator workshop in 2019. Students and children from the rural village can charge up a USB lamp with the mini-motor and bring it back home after the workshop. The exhibition will feature an interactive installation with a hand crank electricity generator which connects to a light box along with letters from the residents of NOIDA. 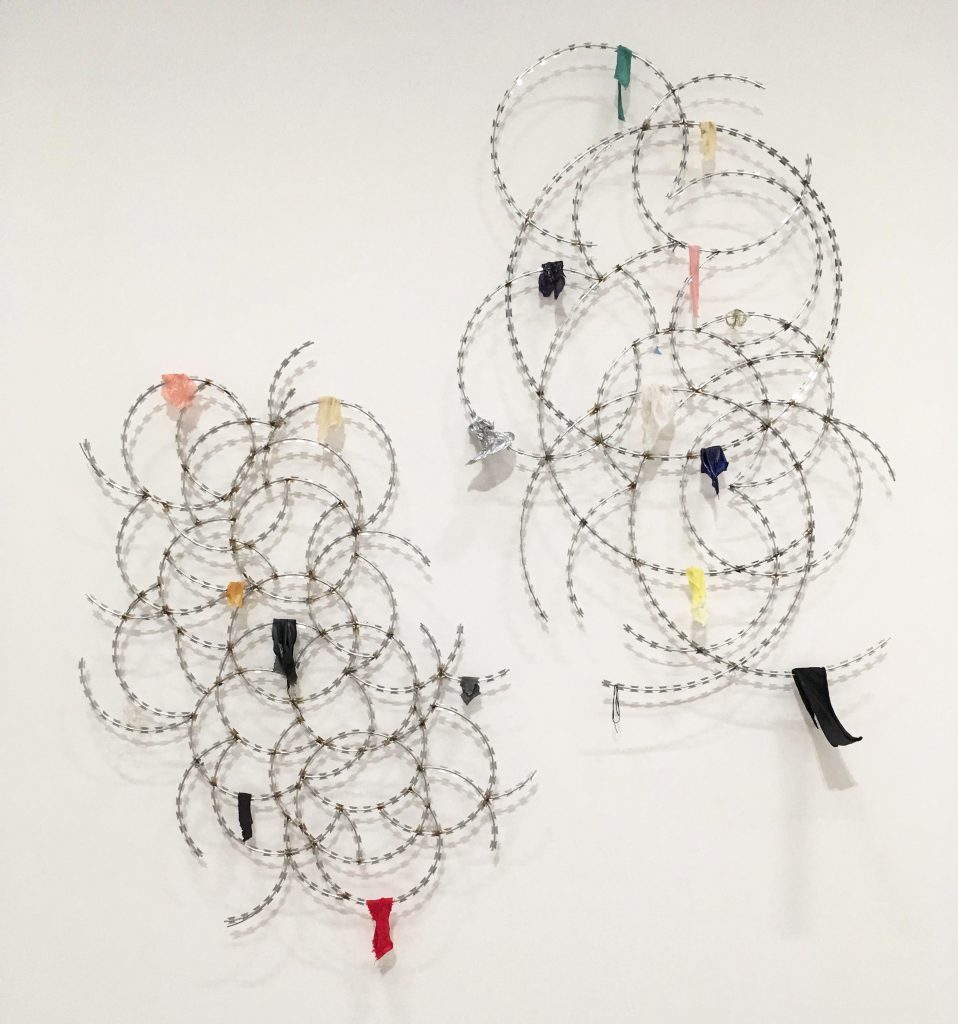 The Barrier series is composed of  razor wire sculptures which form a symbolic representation of both the ingenuity and cruelty of the modern age. Understood as one of the most brutal inventions, it directly impacted the ways lands are divided and bodies are controlled. Originally created to restrict the movement of cattle, razor wires ended up being the most effective and economic way used to restrict humans: from the western expansion of America to the battlefields of World War I and beyond.

Nowadays, concertina wires and barbed wires are ubiquitous with border controls all over the world. In this series of work, reliefs or weavings were created from a combination of both concertina and barbed wires, with different textiles and fabrics dipped in resin. The end result is pieces of clothings and fabrics getting trapped and tangled within the wires, which is a mimicry of a very common phenomenon that happens at the borders. 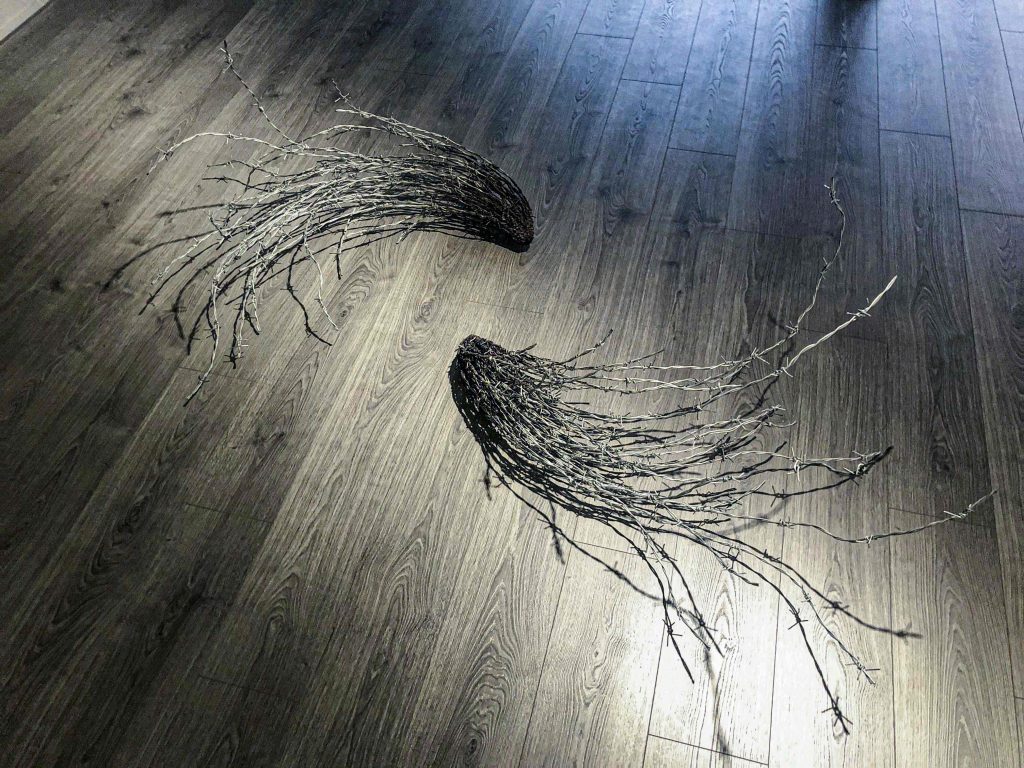 Brace explores the essence of inter-relationships in the contemporary context of intimacy.This intimacy, In Ni’s sense, is visualized through a pair of barbed animal-like sculptures who are hostile but desirous of each other. Recalling the Hedgehog’s Dilemma as raised by Schopenhauer, Brace explained the inevitable distance between individuals, as to secure the comfort of avoiding each other’s barbs and violence comes along with them.